How can we get the best out of exam students? 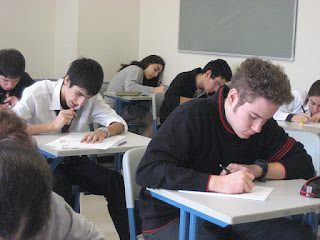 A typical exam in progress

Like it or not, a lot of language learners have passing a language exam as an overriding priority. So it was with considerable interest that I agreed to act as scribe for this Wednesday's ELTChat discussion, which centred on the question "How to get the best out of exam students".

The discussion - which centred on "exam" classes rather than General English classes which aim eventually to register students for an exam - went as follows:

Topic: “How to get the best out of exam students”

1) The session began with discussion on what motivates exam students:

Marc Jones’ opinion was that all of his TOEIC students are “really driven”, but that only half will read/listen to non-TOEIC preparation materials outside of class. Angelos Bollas indicated that this happens to him a lot, too – people are interested in the exams much more than any language they might stand to acquire.

Marisa Constantinides suggested this means that such students are only “exam-driven”, not language acquisition driven. This may not be so surprising in countries like Greece, where the culture is hugely focused on exams and exam results.

Get Great English wasn’t quite so sure things were this black-and-white, however: their students have been observed taking notes on corrections during discussions. But the priority in such classes is definitely testing. Tesal Koksi felt that their students were language-driven, but only through the narrow focus of the exam.


Glenys Hanson indiciated she wasn’t too happy teaching exam classes: in her view, the students focused on the test, not learning the language. Boccaperta LN suggested it could also be quite difficult to motivate students who didn’t choose to take the exam of their own volition.

2) The discussion then moved on to the question of how to teach such extrinsically motivated students:

Boccaperta LN suggested it could be hard to strike an appropriate balance between exam practice, and other, “generally more interesting” activities. Betty the teacher suggested this problem more or less goes with the territory: exam practice is, by definition, quite uniform. Angelos Bollas agreed.

Glenys Hanson suggested it doesn’t have to be like that, though. The French Diplome de competence en langues sets students a problem to solve using reading, listening and speaking. In her view, this is fun to prepare for!

Get Great English indicated that working on discourse (rather than the usual emphasis on strategy, test practice and clearning up language points) turned out to be a good move with their TOEIC students. This aroused quite a bit of interest. Get Great English further explained that they told students Theme & Rheme would help students with reading 6 & 7; whereas Adjacency Pairs would help with listening 2 & 3.

Marisa Constantinides observed that it’s probably possible to sell anything to “exam freak” students provided that you explain simply and clearly how it can help them. Glenys Hanson was not so sure this was true in her teaching context. In her view, if teachers weren’t following the TOEIC preparation manual, most students would reject it.

However, Teflgeek also suggested the way things get explained to students matters. They need to know what the exam is actually testing, rather than just doing practice – that way, they develop skills as well as test familiarity. Angelos Bollas agreed, as did Studio Academic, who indicated that observation reports indicate that good teachers habitually tell students why they are doing exercises or working on target language in exam classes. Marisa Constantinides added that incorporating objectives training into activities can be of tremendous assistance to students – but that teachers she’s observed aren’t always clear in defining activity objectives.

3) The “Washback” effect of test taking was also briefly discussed:

Marisa Constantinides indicated that the Greek experience was overall disappointing: frequently students pass the test but afterwards cannot use the language at all. This implies the teaching was poor. Boccaperta LN indicated that a similar situation exists in Italy; in their view, this contributes to a lack of student motivation.

4) The discussion then returned to motivation (and possible upsides to exam teaching):

Teflgeek indicated that in their view, exams were often the first time students become aware of subskills and start to work on them. Studio Academic agreed. In their experience, useful skills like discourse management receive more focus in FCE/CAE than would be the case in General English classes.

Marisa Constantinides indicated that a typical teaching “trick” is for the teacher to hand over “teacher rights” to different students for different bits of an exam paper. In her view, it can be a powerful motivational tool: she has seen it “work wonders” with some really dour and unwilling students. This technique is part of her own “accelerator toolkit”.

Get Great English further suggested that you can get learners to make their own “mock” questions. ITLegge meanwhile suggested apps like Quizlet or Titanpad might serve to make tasks more collaborative (and thus more motivating).

5) The session concluded with a brief discussion on test familiarisation:

The Teacher James suggested this was crucial: the teacher must make students feel completely at ease with the test. Marisa Constantinides agreed, adding that this would take the “fear and mystery” out of the testing and learning situation.

Teflgeek suggested a great way to get going would be to “do a mock” in the first week of the course. This would also work well as a diagnostic test, since it would reveal areas to focus on subsequently.

Get Great English agreed with all of the above – in their view, just knowing what the test is testing can help students a great deal.

Following the discussion, I was left feeling optimistic. For a short time at least, student motivation - however external its source - is high. The challenge for principled educators is to ensure that language acquisition and test familiarisation go hand-in-hand. Teaching to the test is a tool, but it shouldn't be the only one in the teacher's toolkit. At least, that's my take. What do you think?
Posted by Philip Saxon at 12:51